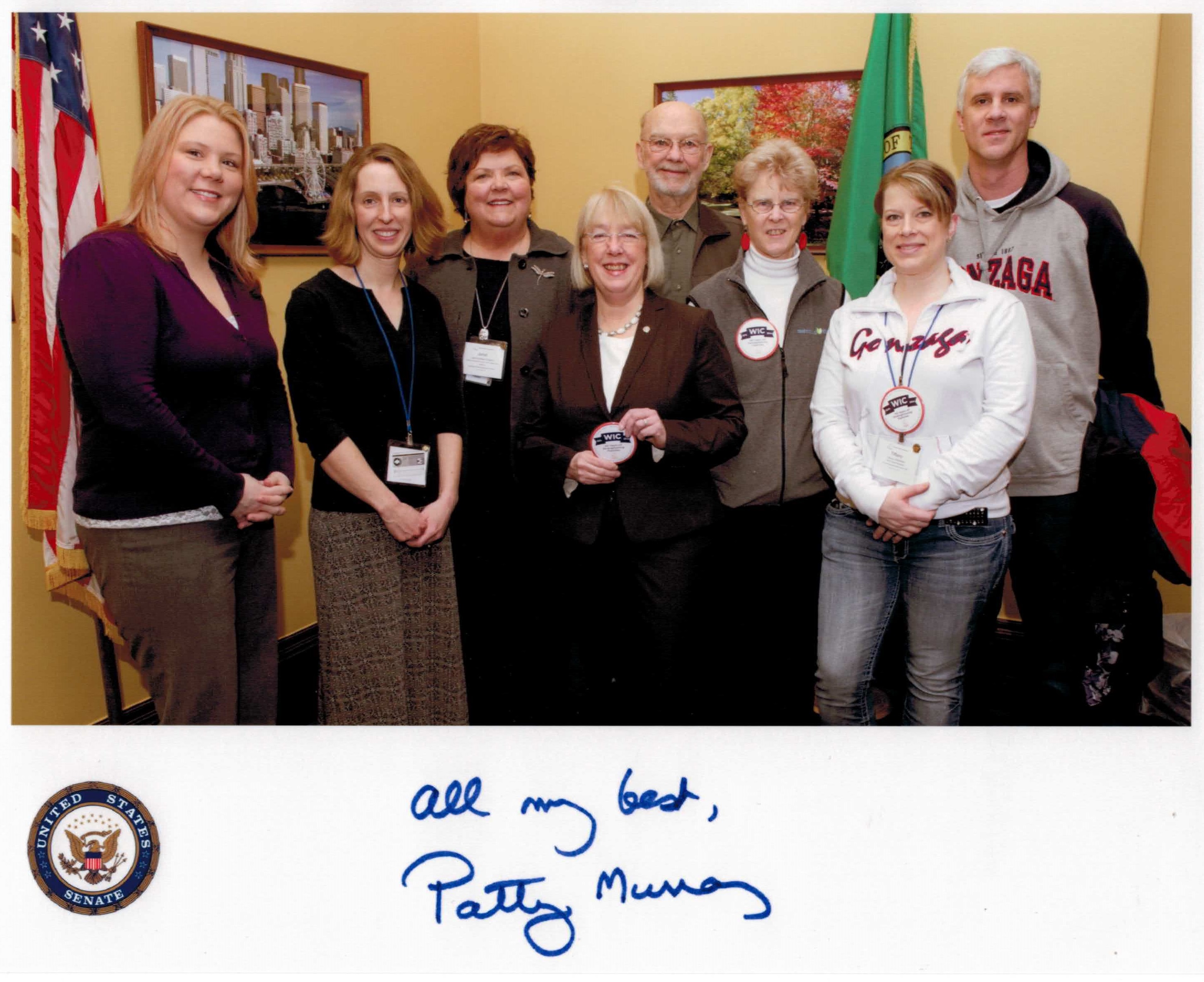 The National WIC Association’s (NWA) Washington Leadership Conference was held March 2nd through March 4th in the Nation’s Capital. This year’s conference celebrated the WIC program’s 40th Anniversary, and included information on WIC’s accomplishments and ideas on how to celebrate this important occasion. The NWA specifically asked us to help them spread the word by marketing the new website and five videos, with focuses on the WIC program, nutrition education, healthy food, breastfeeding support and healthcare referrals, specifically developed for the 40th Anniversary (www.wicturns40.org).
Congresswoman McMorris Rodgers with Nutrition First

The Conference began and ended with excitement, and was filled with memorable moments, experiences and opportunities for change. Sunday did not disappoint with a thought-provoking presentation by Rev. Douglas Greenaway (NWA President and CEO), followed by a stimulating speaker from the National Partnership for Women & Families, making a strong case for federal family-friendly policies to improve workplaces for women and their families (for more information, visit: https://s3.amazonaws.com/aws.upl/nwica.org/vickishabo_march2_2014.pdf). A presentation about the difference between lobbying and advocacy reminded us that we could be part of the legislative process, and encouraged us to take part in advocacy efforts.

Unfortunately, important events like the White House Briefing, were cancelled on Monday to a heavy snowstorm hitting the D.C. area, blanketing roads with snow and ice in just hours. The conference carried on, however, with sessions and break-outs useful for WIC Coordinators and Directors.
Congressman Reichert with Carrie Beck and Kristen Rezabek

Our team from Washington State started making Legislative visits early Tuesday afternoon, and finished up in the early evening. We were able to visit with all ten Congressional Legislators or aides and both Senators. Our visit with Cathy McMorris Rodgers, Republican of the House from District #7 commented on her support of the WIC program and breastfeeding, noting of her recent accomplishment to have breastfed her infant for three months, despite being a busy working mom. Jaime Herrera Beutler’s legislative aide also expressed interest and support for breastfeeding-promoting funding and policies. We were also able to meet directly with Representatives David Reichert and Kilmer, and Congresswoman McMorris-Rodgers and Senators Maria Cantwell and Patty Murray. Cantwell candidly expressed her disappointment about the USDA’s decision not to include white potatoes as part of the WIC food package. Although Kristen and Janet reinforced recommendations made by the Institute of Medicine and data indicating white potatoes as the most widely consumed vegetable in the United States, Congresswoman Cantwell strongly expressed her belief that WIC was wrong in their decision, noting this gives potatoes a “black eye”. It would be great for you to write Senator Cantwell and let her know how valuable the WIC program is and the importance of highly nutritious foods to the WIC food package.
Senator Cantwell along with Carrie Beck, Kristen Rezabek, Janet Charles, Tiffany Schamber and Wende Dolstad

I enjoyed the opportunity to meet several staff members of NWA, including Robert Lee, the Membership Coordinator and Leadership Academy Administrator, whose friendliness and outgoing personality is contagious. It was great to meet and reunite Coordinators and Directors from WIC agencies all around the country, including staff from the WIC program right next to me in Oregon.

Washington D.C. is a place filled with uncompromising energy and opportunities for profound policy changes. Thank you to the NWA for your passion, guidance and a great conference!